Assessing system adequacy is part of TSOs’ tasks, and, consequently, one of ENTSO-E’s most important mandates. Resource adequacy requires advanced methodologies to capture and analyse rare events with adverse consequences for the supply of electric power. Over the past decade, ENTSO-E has been continuously improving its methodologies and forecasts.

Looking ahead: the Mid-Term Adequacy Forecast

The Mid-term Adequacy Forecast (MAF) is a pan-European assessment of power system adequacy, spanning the next 10 years. Released on a yearly basis, it goes beyond the legal mandate as set by Regulation 714/2009, to better answer the needs identified by the Electricity Coordination Group11. Indeed, the ECG found that adequacy assessments are more useful when focussed on the mid-term horizon (up to 10 years ahead), as these can be used to assess potential load shedding risks and send signals to both market players and decision-makers of the need for the generation fleet to evolve12.

The MAF is based upon a probabilistic analysis conducted using sophisticated market modelling tools. Used for the first time in the 2016 edition, this approach has been further consolidated and standardised in the MAF 2017. The MAF 2017 establishes a pan-European standard and ‘common language’ of power system adequacy. To this end, extensive collaborative effort has been made by representatives from TSOs covering the whole pan-European area under the coordination of ENTSO-E. The same modelling tools used in 2016 have been further developed and aligned, to conduct a comprehensive market-based probabilistic assessment of adequacy throughout Europe.

ENTSO-E must develop a European generation adequacy outlook, every two years covering the overall adequacy of the electricity system to supply current and projected demands for electricity for the next five-year period as well as for the period between five and 15 years from the date of that outlook (Article 8, Regulation 714/2009)

The MAF 2017 is the first to introduce a representation of demand side response (DSR) based on the information collected by TSOs. DSR was modelled with different price bands, to allow for a more detailed representation, e.g. of industrial and domestic DSR. In addition, a new sensitivity simulation with estimated risk of generation mothballing or capacity exit was performed. Finally, the pan-European climate database was extended to cover more samples of the climatic variations.

4 July 2017: Presentation of the preliminary outcomes of the MAF
2 Oct-10 Nov 2017: Publication of the final MAF 2017 and public consultation. The comments received will be considered in the elaboration of future MAFs.

Power systems are increasingly affected by climate conditions. To realistically forecast possible future events, it is necessary to deploy a comprehensive set of climate data, covering a large range of possible outcomes, including ‘normal’ as well as ‘extreme’ conditions.

The MAF 2017 also demonstrates complex and strong system interdependencies calling for a pan-European perspective. Measures to overcome adequacy problems may be allocated to the supply, demand storage or grid sector, e.g. additional interconnection may supersede the need to enhance the generation capacity within a country. Therefore, decision-makers need to coordinate their activities to ensure an efficient deployment of partially complementary measures.

In addition, the results demonstrate the massive impact on adequacy of generators mothballing or closure, not only in the country with generation exit risks but in a much larger European area. It will be crucial to monitor mothballing activities on a broader European scale.

The present pan-European assessment inevitably faces limitations. In particular, as the examples of the cold spell in winter 2017 and the winter outlook show, the European assessment may fail to capture some particular elements and interdependencies necessary to forecast and assess in sufficient detail all the potential tense situations.

Continuous improvement of the future MAFs will require work on three dimensions: additional data collection, further improvement of the modelling tools, and further convergence to common standards in terms of data and methodology. In addition, future MAFs will be embedded in a broader set of stakeholder activities, also including complementary regional and national analyses focusing on local specificities. Learnings and new developments will then be fed into the next edition of the MAF to ensure continuity and consistent improvements.

ENTSO-E’s winter and summer outlooks are pan-European, system-wide analysis of risks to electricity security of supply. They present TSOs’ views on the risks to security of supply and the countermeasures they plan for the coming season, either individually or in cooperation.

The winter 2016/2017 saw the European power system facing tensions due to an unforeseen cold spell combined with low availability of nuclear generation in France. Consequently, ENTSO-E launched several important improvements in the preparation of the Winter Outlook 2017/2018.

Instead of considering situations that only happen in 1 year out of 10, the Winter Outlook 2017/2018 examines worst-case situations that could occur in 1 year out of 20, thus covering more potential risks. In addition, ENTSO-E analysed the risks associated with extreme climatic conditions taking place simultaneously in all of Europe, and performed several qualitative risk assessments and stress tests.

Each outlook is accompanied by a review of what happened during the previous season, based on qualitative information by TSOs presenting the main events that occurred during the past period and comparing them to the forecasts and risks foreseen in the corresponding outlook. Because of the unusually low temperatures, the Review of Winter 2016/2017 is complemented by a dedicated ENTSO-E report on the cold spell of January 2017, looking in detail at the consequences of the cold spell on systems and markets in the most impacted countries. 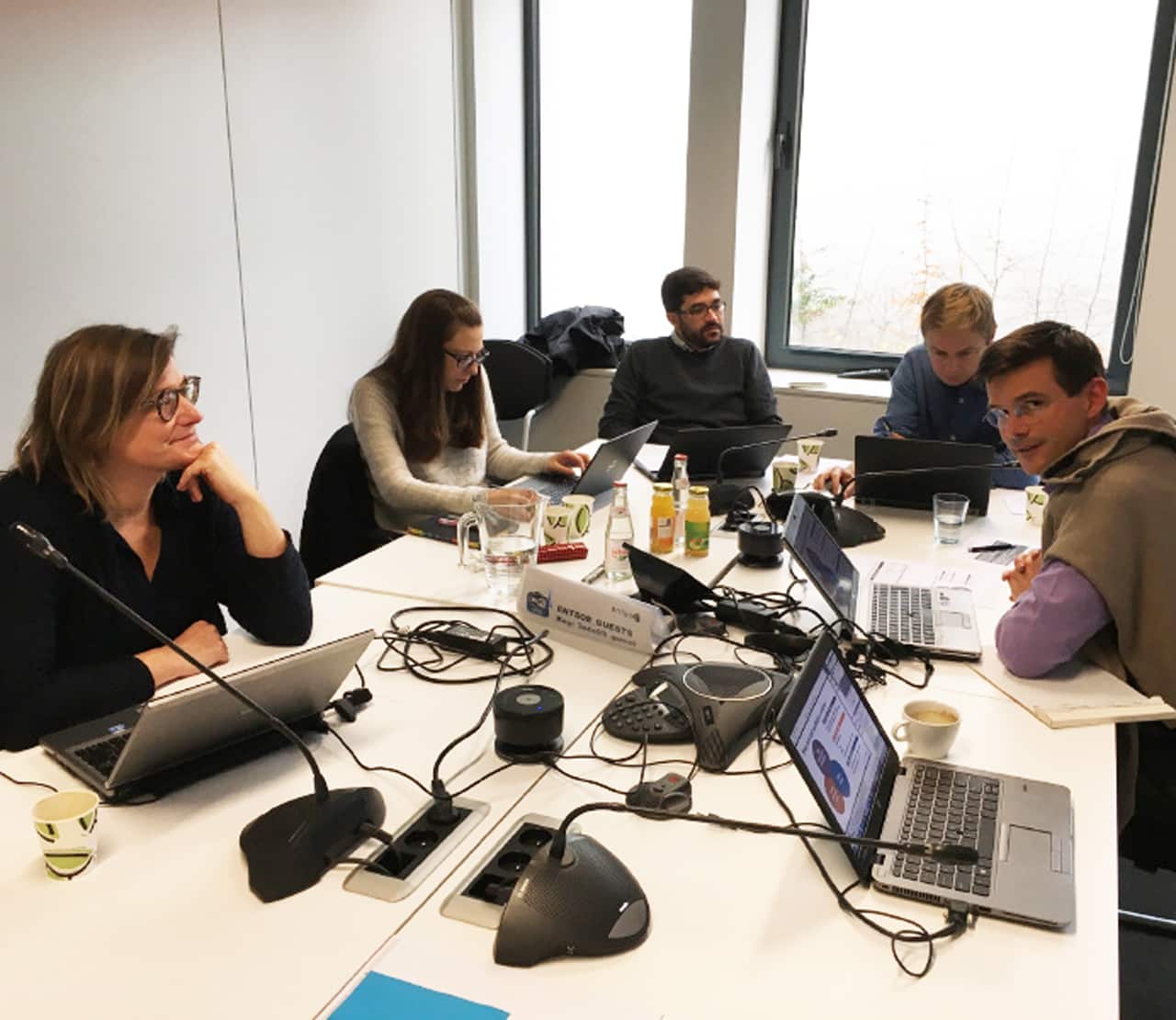 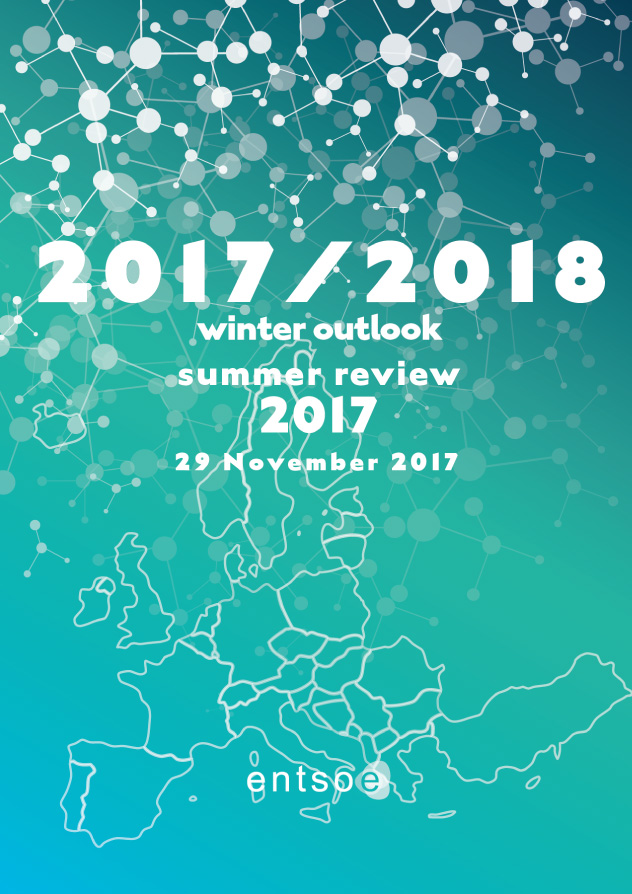 January 2017 saw an extended cold wave that created a stressed situation for the TSOs in Continental Europe. The severe weather conditions placed significant stress on the power grids in France, Italy, Switzerland, Belgium, Romania, Bulgaria and Greece, and to a lesser extent on the surrounding countries which supported their neighbours. The extended nature of the cold spell affecting multiple countries simultaneously was coupled with the challenges faced in terms of generation adequacy and unscheduled flows issues over this period.

ENTSO-E’s Winter Outlook 2016/2017 foresaw that cold weather combined with reduced generation capacity in some areas could lead to adequacy problems in France and in some neighbouring countries. However, the methodology did not allow to forecast the situation as it unfolded in South East Europe, where a very severe cold wave occurred with temperatures much lower than the one-in-ten-year situations assessed in ENTSO-E’s seasonal outlooks.

To better address similar situations in future, in 2017 ENTSO-E launched a taskforce mandated to set a definition of critical grid situations, define a general coordination process, propose process improvements to ENTSO-E’s seasonal outlooks and conduct a market analysis of the January 2017 events. Prepared in coordination with the Electricity Coordination Group, the report ‘Managing critical grid situations – Success and Challenges’ released in May 2017 provides an overview of the sequence of events and analysis of the situation in each country affected and identifies focus areas for action.

It finds that the measures applied by TSOs were effective in preventing supply interruption and helped to avoid the use of extraordinary measures such as manual load shedding at the most critical times. Thanks to efficient cooperation between TSOs and RSCs, the cold spell was managed effectively at both regional and local level. The RSC service ‘short-medium term adequacy’, although still under development, demonstrated its added-value in the Continental Western Europe region to better manage the adequacy issues at regional level. Focus areas include an improvement in seasonal outlook’s methodologies and improved coordination at regional level.

Measures identified to detect critical grid situations were implemented in time for the winter 2017-2018. In particular, the coordination issues experienced in South-East Europe were addressed with the support of SCC, the RSC in Belgrade. ENTSO-E received positive feedback on the improved coordination in South-East of Europe.

Released in November 2017, the market analysis of the cold spell focuses on identifying market distortions and potentially identifying parameters that could hint at or forecast critical situations. In particular, it finds that market integration and coordinated actions among TSOs played a key role in dealing with extreme situations. Without cross-border exchanges, some countries, such as Belgium, Italy or Switzerland, might have faced shortages in supply. The report, however, also identifies several measures to increase transparency and information in the day-ahead and week-ahead forecasts.