With Europe’s power grid evolving quickly into a smart grid, the steady growth of renewable energy sources (RES) that need to be integrated, and new actors in the market, TSOs are facing new challenges that require innovative ways of thinking. ENTSO-E’s R&D activities, as legally mandated by Regulation (EC) No 714/2009 and Directive 2009/72/EC, involve promoting and coordinating research, development and innovation activities of TSOs, including monitoring of their implementation and real-life application.

In May 2017, ENTSO-E released its R&I Implementation Plan 2017-2019: Power System Innovation for all Europeans. The Implementation Plan is one of the key planning instruments for coordinating TSOs’ efforts in R&I. It seeks to prioritise and address the R&I activities identified in ENTSO-E’s R&I Roadmap 2017-2026, with the overarching goal of establishing and maintaining an efficient, cost-effective, reliable and secure European power system.

The Implementation Plan 2017-2019 streamlines the R&I priorities for 2017 and outlines topics to be tackled through 2018 and 2019. The main activities for 2017 focused on providing flexibility to the grid and assessing and further developing stability mechanisms, mainly with regards to the integration of RES. The Plan also tackled the need to deploy ICT infrastructures for data management, also with the objective of promoting the increasing cooperation between TSOs and DSOs.

The 2018-2020 edition of the Implementation Plan, initially scheduled for June 2017, was postponed to 2018 to align the R&I implementation activities of TSOs with those of the European Technology & Innovation Platforms (ETIP).

ENTSO-E is an active partner of the ETIP Smart Networks for Energy Transition, which is currently developing its vision on research and innovation for the grid for 2050. ENTSO-E and ETIP SNET collaborate closely to develop a coherent implementation plan for 2020 (more on this below). 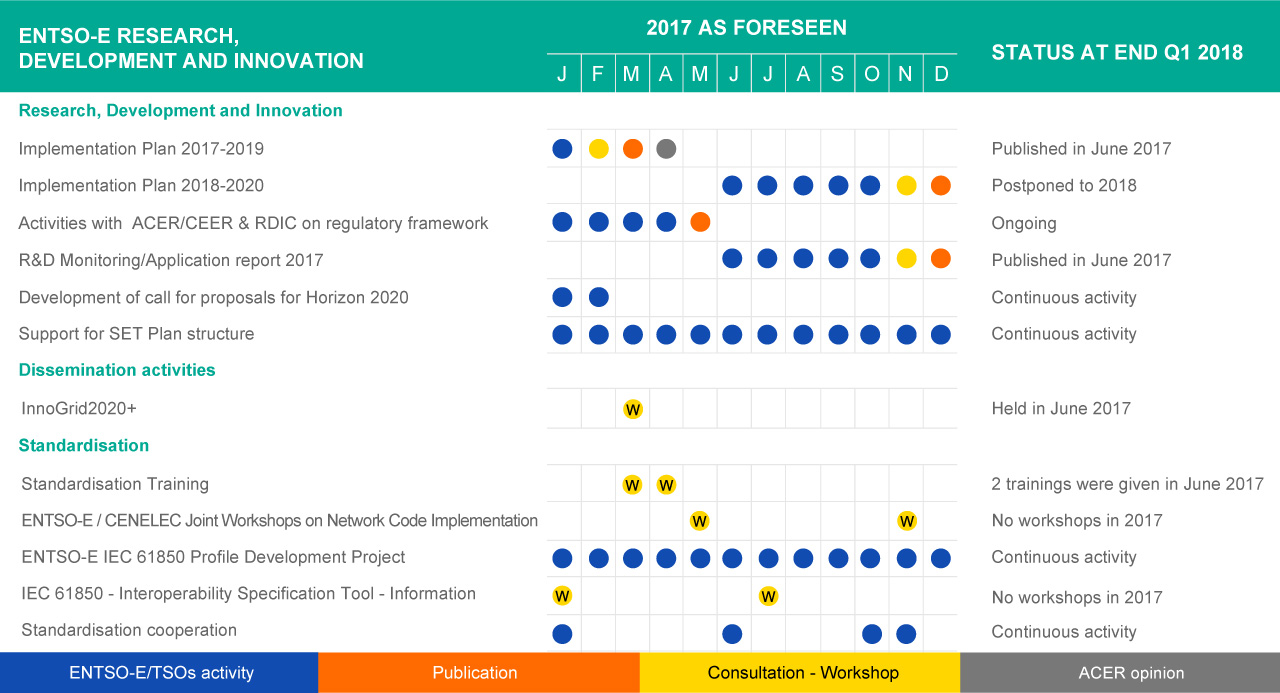 ENTSO-E’s R&I Application Report 2016, released in June 2017, highlights concrete results from 20 EU-funded R&D projects which have led to real-life applications. Upon ACER’s recommendation (Opinion 11-2016 on ENTSO-E’s R&I Roadmap 2017-2026) this report is more result-oriented than the 2015 edition. It aims to demonstrate the concrete impact and benefits of TSOs’ RD&I activities on the power system.

Most of the projects analysed led to the development of concrete applications to address specific challenges faced by TSOs, e.g. unification of several market modelling tools, and real-life assessment of the capabilities of distributed energy resources to provide flexibility services. TSOs then integrated these applications in their procedures and shared them among themselves.

The report illustrates how these applications have not only resulted in measurable benefits – safer methods, cost reduction and better cost-benefit analyses, harmonisation and product improvement, CO2 footprint reduction – but also in non-measurable gains: by developing these applications, knowledge of TSOs and their partners, and inter-TSO cooperation at the pan-European level, have greatly increased.

ENTSO-E is a key partner in several projects awarded by the Horizon 2020 programme, including the following:

Other awarded projects include OSMOSE, EUSYSFLEX and FLEXITRANSTORE. ENTSO-E also contributed to the elaboration of the Horizon 2018-2020 work programme and gave input to the FP9 for innovation – the new framework programme that will replace Horizon 2020 as of January 2021 – through a stakeholder consultation. ENTSO-E will continue to actively participate in the drafting of the FP9 throughout 2018 and 2019.

The INTENSYS4EU project, as well as ENTSO-E’s activities within the European Technology & Innovation Platform for Smart Networks for Energy Transition (ETIP SNET), fall under the umbrella of the European Strategic Energy Technology Plan (SET Plan). The SET Plan is part of a new European energy R&I approach designed to accelerate the transformation of the EU’s energy system and to bring promising new zero-emissions energy technologies to the market. It promotes cooperation amongst different stakeholders and institutions, including ENTSO-E.

Smart Network for the Energy Transition

The European Technology & Innovation Platforms (ETIPs) have been created by the European Commission in the framework of the new Integrated Roadmap Strategic Energy Technology Plan (SET-Plan) by bringing together a multitude of stakeholders and experts from the energy sector. The role of the ETIP Smart Networks for Energy Transition (SNET) is to guide RD&I to support Europe’s energy transition.

ENTSO-E is also involved in the elaboration of the ETIP SNET vision for research and innovation, a high-level document that provides a roadmap for R&I activities for the next decade.

The ETIP SNET vision for 2030 concentrates on the need to develop an integrated approach towards the energy system to fulfil the climate targets while ensuring security of supply. The vision will also envisage the possibility of users actively engaging in the marketplace.

On June 2017, ENTSO-E organised the 6th edition of InnoGrid2020+ jointly with EDSO for Smart Grids, who gathered 34 electricity distribution system operators (DSOs) to promote the development of smart grid models and technologies. This annual conference provides a space for TSOs and DSOs to showcase their R&D innovative projects and share the results with policymakers and stakeholders alike. The 2017 edition focused on active customer and active system management, data management and regulation and the technological needs to ensure the sustainable development of the smart grids.

The energy transition carries with it a series of transformations that are giving customers a more active role in the system, consequently placing the customer centre stage. This will imply the inclusion of new actors in the market, like aggregators, an increase in decentralised systems and further development of demand-response. With these changes already taking place, both the electricity market and network are facing new challenges that require TSOs and DSOs alike to rethink their current interface.

Following a 2016 common TSO-DSO report outlining the needs, roles and responsibilities in data exchange, 2017 was focused on designing more concrete models for data management. ENTSO-E commissioned a report describing the state of play of data exchange platforms in Europe. The report shows how centralised data exchange platforms existing in several European countries provide a simple data access point for customers and new service providers. The report concluded that, overall, data platforms improve market efficiency, remove market barriers and ultimately empower the consumer to participate in the market by giving them and authorised third parties of their choice access to their data. Based on this state of play, ENTSO-E intends to further investigate the possible applications of data exchange platforms in different business processes.

A second area of collaboration for TSOs and DSOs, which has been the main priority of 2017, concerns active system management and the use of distributed flexibility. Storage, distributed generation and customer participation through demand side response have the potential to generate new services for the grid and the system. These have been known as distributed flexibilities, and they will be key to efficiently managing the electrical system of the future and developing new market products. Rules are needed to ensure a fair and operative market, limit the upsurge of non-coordinated local market places and guarantee that the new services are sufficiently valued.

A core question remains the interaction between balancing the electrical system and managing congestions on the grid. TSOs and DSOs work together to understand their respective challenges and responsibilities towards creating an integrated market. Several expert workshops were conducted in 2017 to share best practices, define upcoming challenges and design possible solutions. The step forward in 2018 consists of involving stakeholders so their expectations can be heard. A common report on active system management is planned for 2018, aiming to define the uses of active system management and distributed flexibilities, studying the interactions between balancing and congestion management and assessing whether common European guidelines will be required.

In addition to the above, ENTSO-E contributes to the European Commission Expert Group on demand side response, under the Smart Grid Taskforce, which focuses on deployment of explicit DSR in Europe, contractual arrangements between different players and market solutions for accessing and using distributed flexibilities. An interim report was produced in January 2018. A paper with recommendations on best practices and regulatory gaps is expected to be released by the end of 2018.